The Breadalbane Scheme includes six dams and seven power stations, with storage reservoirs linked via tunnels to Loch Lyon, Loch Daimh, Loch Tay, and Loch Earn. Stations at Lubreoch, Cashlie, Lochay, Finlarig, Lednock, St Fillans, and Dalchonzie are acclaimed as bringing ‘power to the glens’. Comrie’s oldest resident, Nan Doig (1912–2014), looked back on life in the nearby glens before the arrival of hydro-electricity in the Fifties and Sixties:

“We had the lease of Balmuick in Glen Lednock, from 1929… And when we farmed at the Straid (near Muthill) in 1953, we had one Tilly, and the rest were just the little paraffin lamps, and we a good, warm stove … We thought nothing of it.” 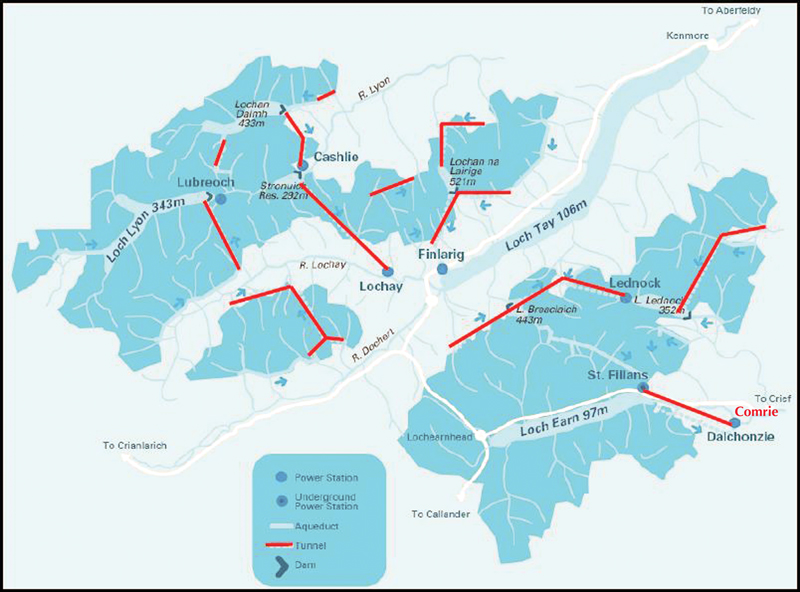 The advent of hydro-electric power transformed homes and communities. Workers came from a’ the airts, and several languages were used, besides Scottish and Irish Gaelic, commonly spoken among Highlanders and men from Donegal. Incomers registered for employment in Scotland and many married, stayed on and made their homes in Perthshire. 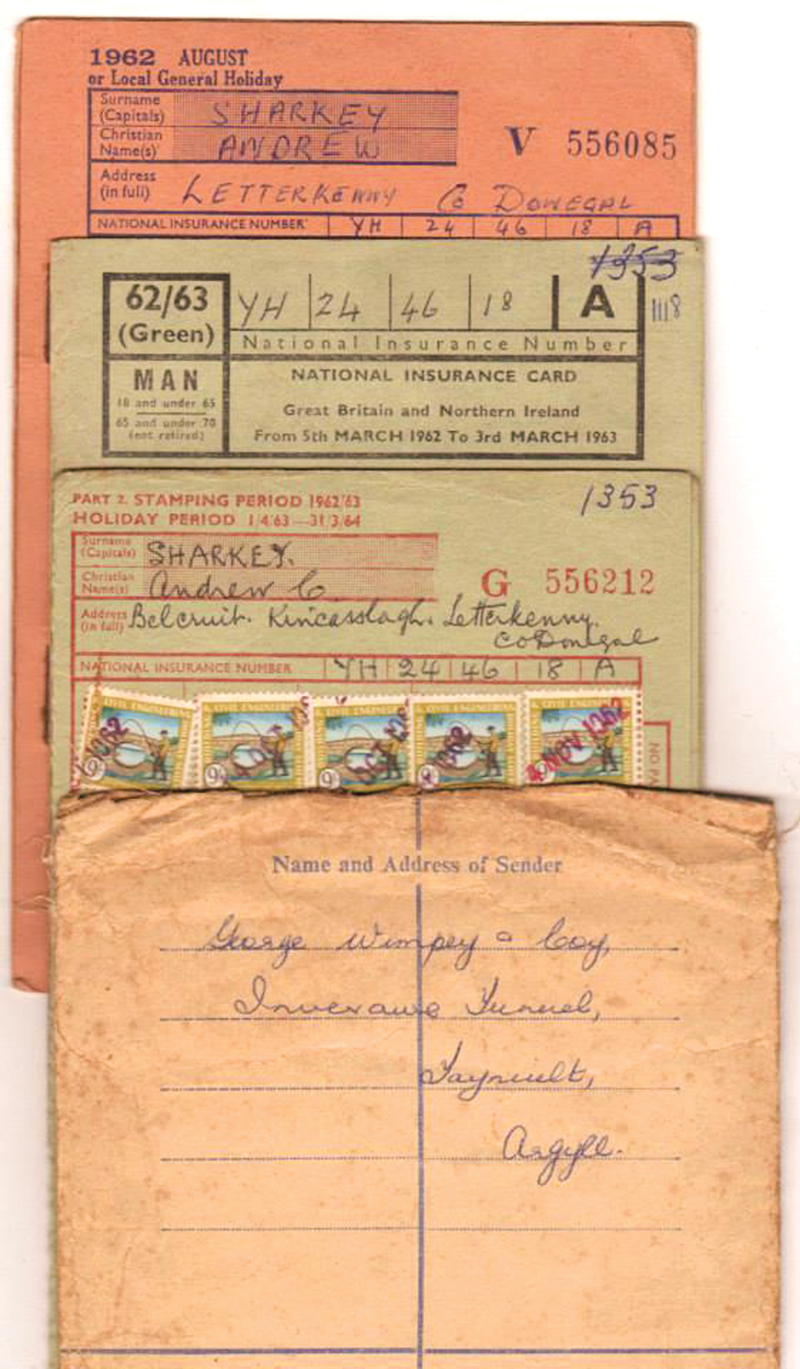 “We showed up for work in shirts and trousers, and were given a helmet with a light on it so that you could see your way in the dark… If you wanted a boiler suit, you could buy one…” [Memories, 2014] 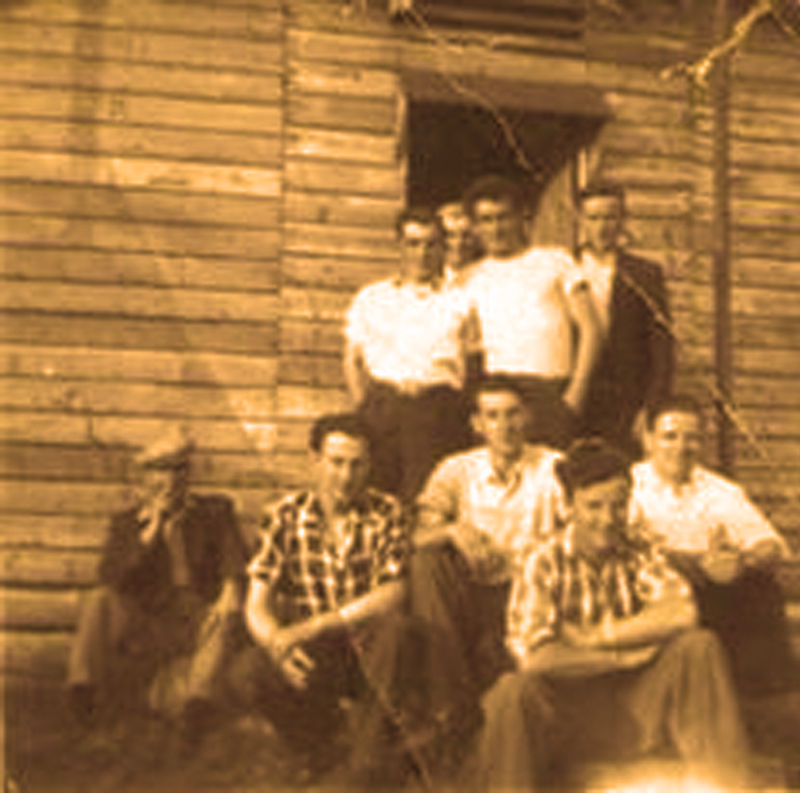 The men lived in camp for the duration of the work, miles away from any facilities. As they all recall, a van sold fags, newspapers, sweets and a few odds and ends… there was a canteen. 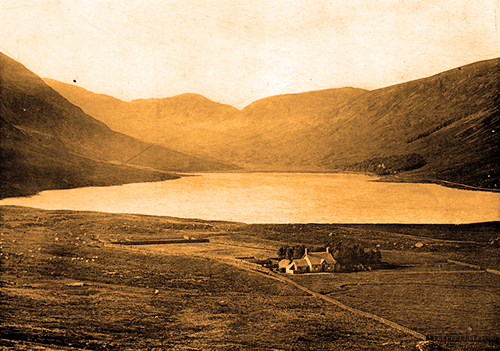 Loch Turret, before the Hydro dam 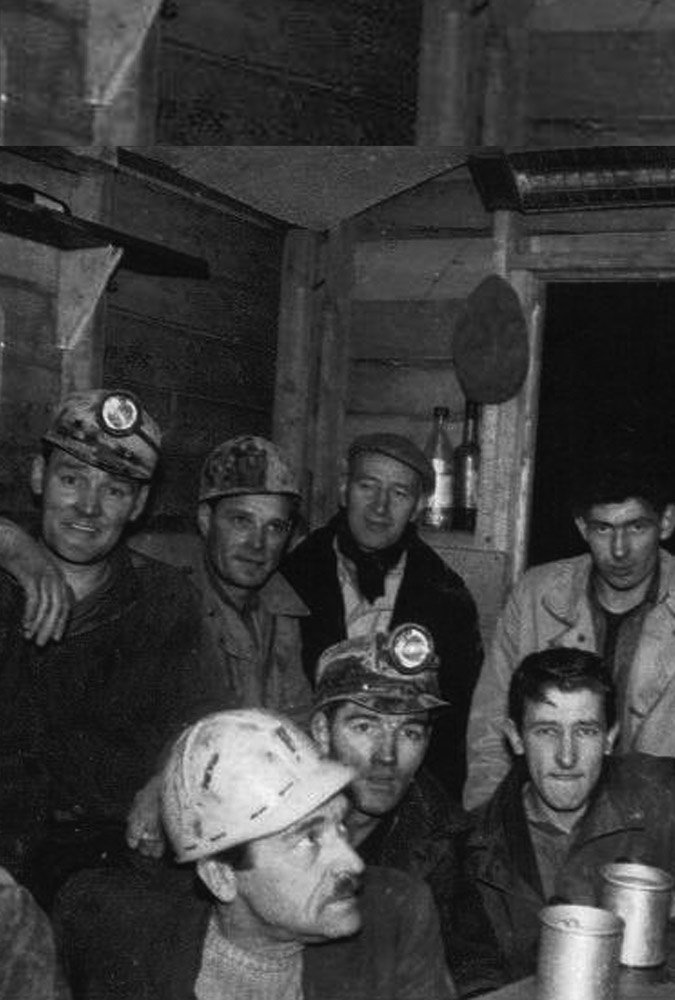 Peter Ward (back row, 1st left) was the ‘ganger’. He was from Arranmore Island, Donegal, and moved to Muthill. He saw the completion of a later dam, at Loch Turret (1968), but sadly died in a road accident shortly afterwards.

A mug of tea was always welcome, for at times the dust was almost unbearable – you could brew it in a tin-can, or anything. 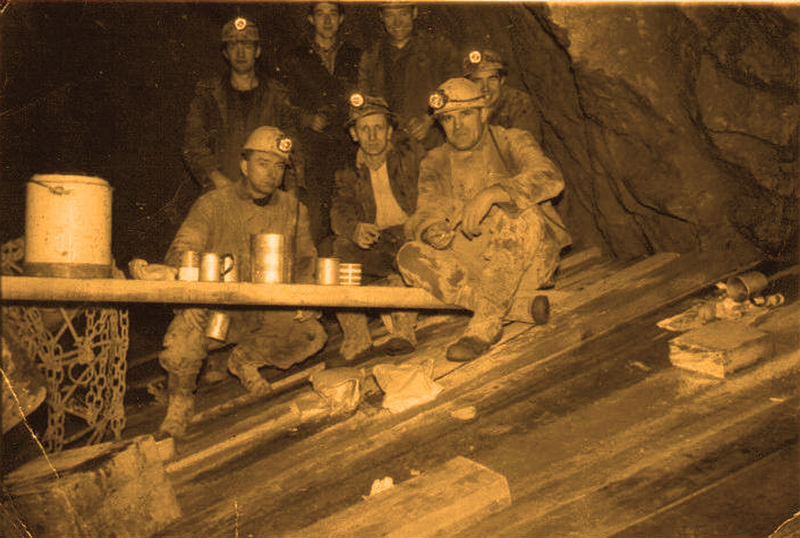 In the Fifties, Health and Safety legislation was practically non-existent and there was no legal requirement to wear masks or protective clothing. Though the pay was good, many also paid a very high price, with injuries or loss of life through accidents, as well as lung diseases leading to early death. 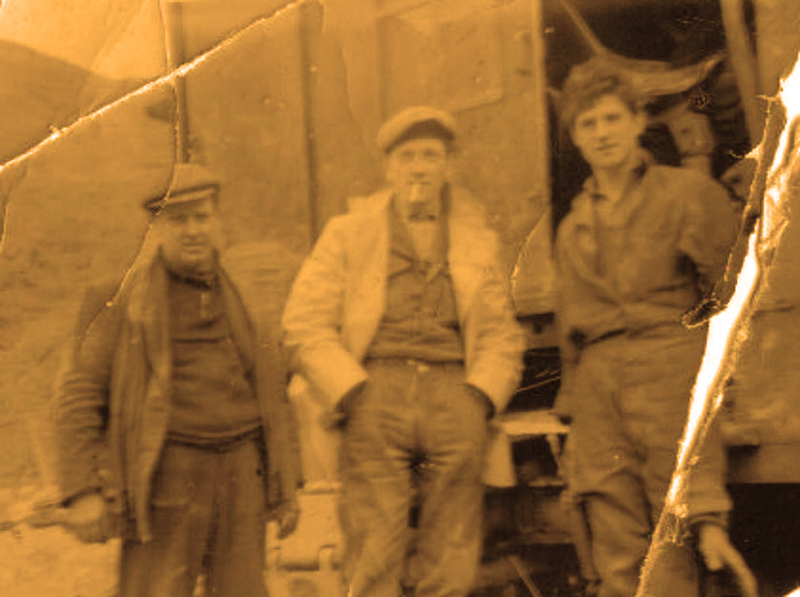 Nearly everyone smoked in those days….

There was constant danger … 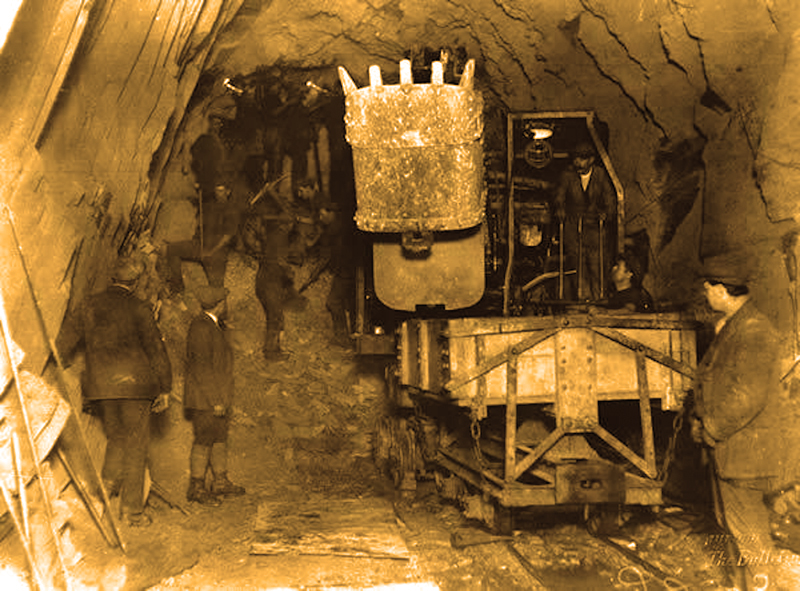 The men lived with the noise of the blasting and the smell of carbide, the non-stop clatter of machinery, and the choking dust of falling rubble. 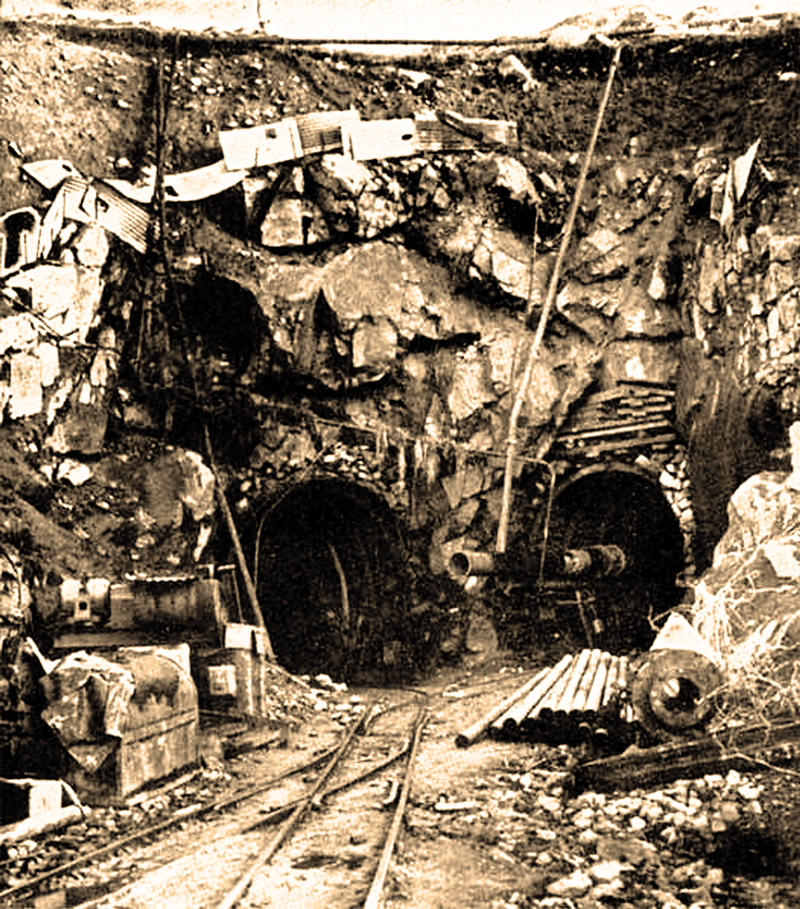 Excavating rock for a hydro tunnel

It was front-page news when the men who dug the Lednock tunnel broke a world record, as they worked night and day for a week to excavate 557 feet of rock. 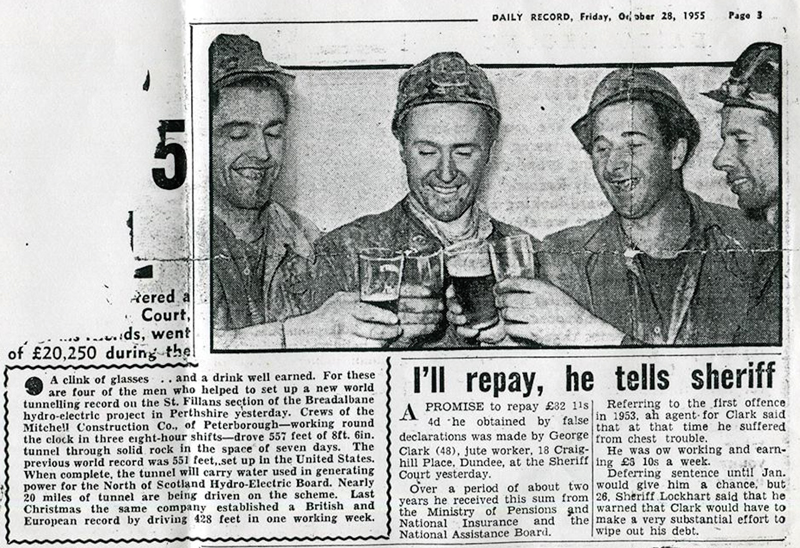 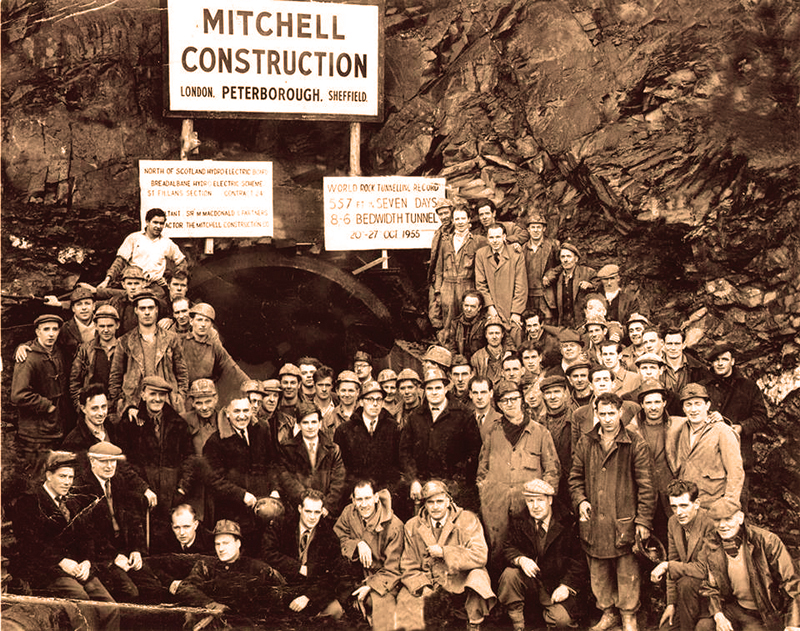 John Herron, whose father worked on the tunnel, sent the photo from Donegal in October 2013:

“The sixth person down on the right-hand side at the top looks like my father, Paddy Herron…”

A Time to remember

At the celebration in the village, they all received a certificate. 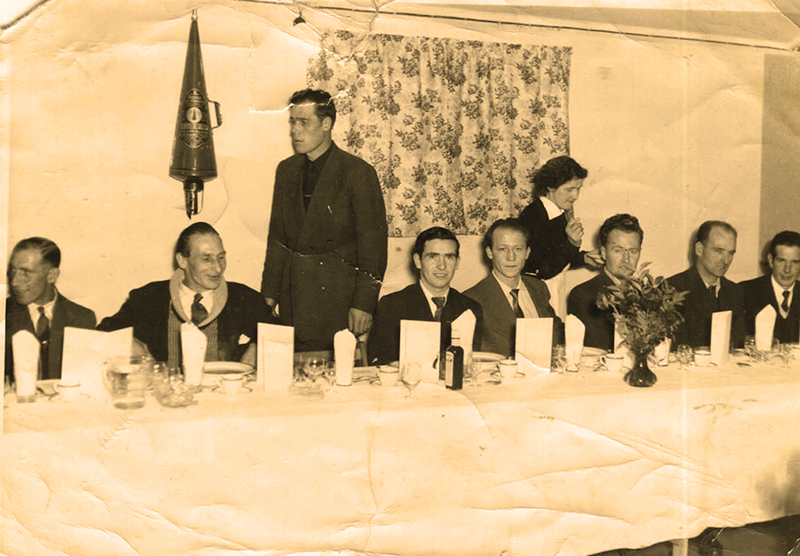 I worked in one o the tunnels with a few lads from Ireland, mainly Donegal. A better crew you could not get – they took me, a novice, under their wing and made me one of their own. The conditions would give today’s Health and Safety officers a heart attack! But for me, it’s fond memories. I remember asking one of the crew why everyone called him ‘Patsy’ – it’s usually a girls name here, and he was far from girly! He growled back to me “That is my name!” 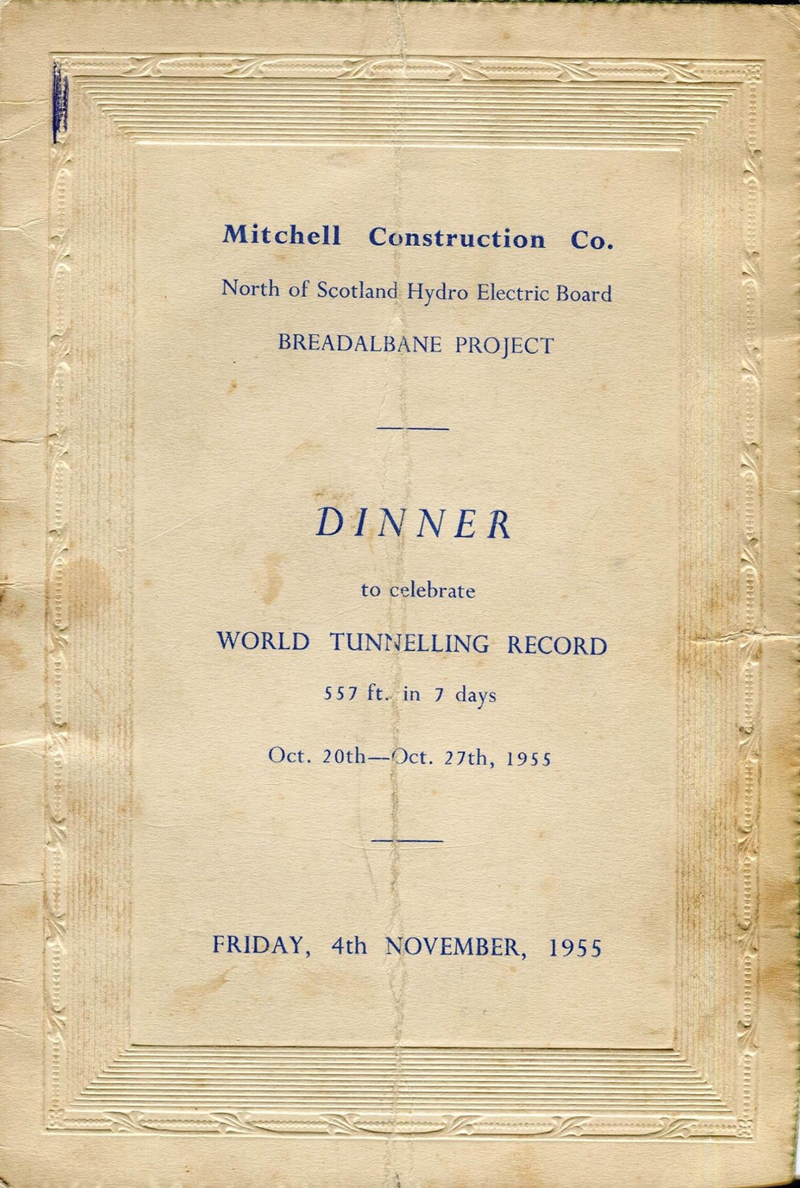 Then there was ‘Sparks’ Ward, so we asked why ‘Sparks’? His reply, showing his fists, was, “If I raise these, the sparks will fly!” 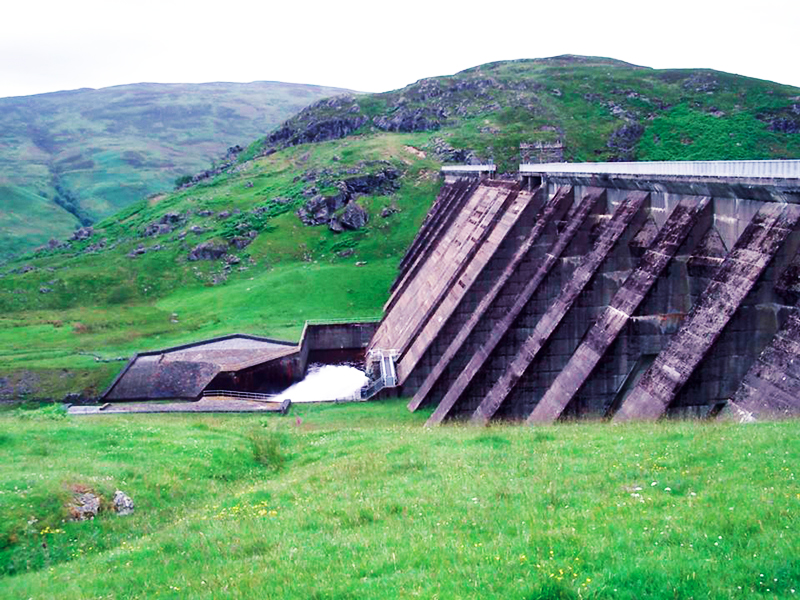 Situated 6 miles north of the ‘Shakey toon’ (Comrie), the Lednock Dam was designed and built with a diamond-headed buttress to cope with earthquake hazards.

The photo above is from John F. O’Donnell, Crieff, whose father came from Donegal to work on the Lednock scheme. Below, former ‘tunnel tiger’ John ‘Gonna’ O’Donnell returned home to Donegal, but often visits Scotland to remember fellow workers. (2014) 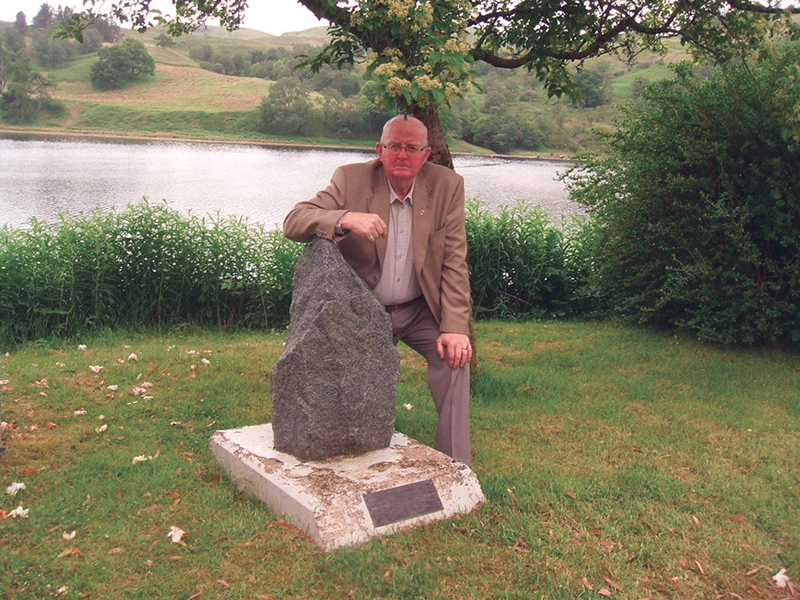