From the mid-1700s when the manufacture of linen became one of Scotland’s most important industries, bleachfields were needed to whiten the cloth woven in linen mills The biggest bleachfield in Britain was in the Perthshire village of Luncarty, where local folk recall the hey-day of the industry that ended in 1996.

There is a large farm here, and though the soil is rather barren, the hand of industry has wrought wonders… for more than thirty years past, there have been eighty acres or upwards covered with cloth, which has been whitened and dressed either after the Dutch or Irish mode, in so perfect a manner, that as yet it is unrivalled in Great Britain… Besides linens of various descriptions, they have now begun to bleach muslins. This company spins cotton … They make their own soap and candles till of late. … There are more than three hundred employed here, besides their families. 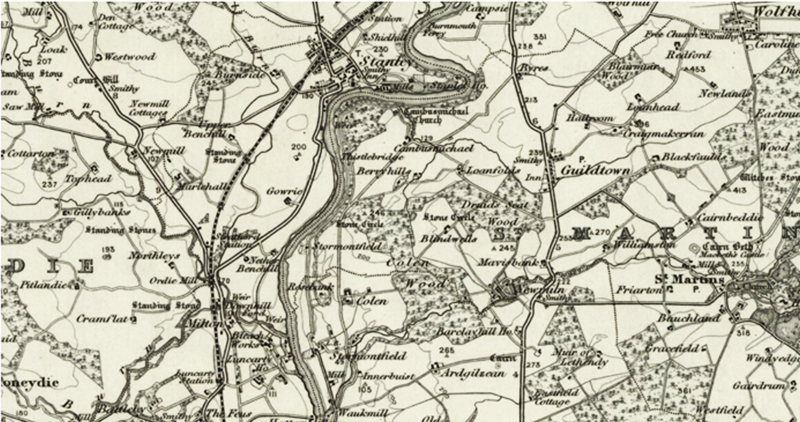 Luncarty has long been considered the most extensive linen cloth bleachfield in Scotland. The ground belonging to the company extends to 130 acres and upward… The power required for driving the machinery is obtained by water … It is stated in the last Statistical Account that there were then 500,000 yards of cloth annually bleached here. There is now at least four times that amount of business done. There are therefore annually bleached here, of linen cloth, of which a considerable proportion is damask, 2,000,000 yards. In these different operations there are regularly employed from 120 to 130 hands, all of whom are resident on the company’s grounds, and the greater part of whom have been born and brought up on the place.

I’ve lived in Luncarty all my life… I remember being in the workshop when I was seven... I caught my finger in a vice – a good way to learn, and I never did that again! … My father was an engineer and my grandfather and my great grandfather before him. He started in 1881, and he finished in ’96, when it closed. So I’m the fourth generation of Farquhars. Quite a few families have been here long-term. 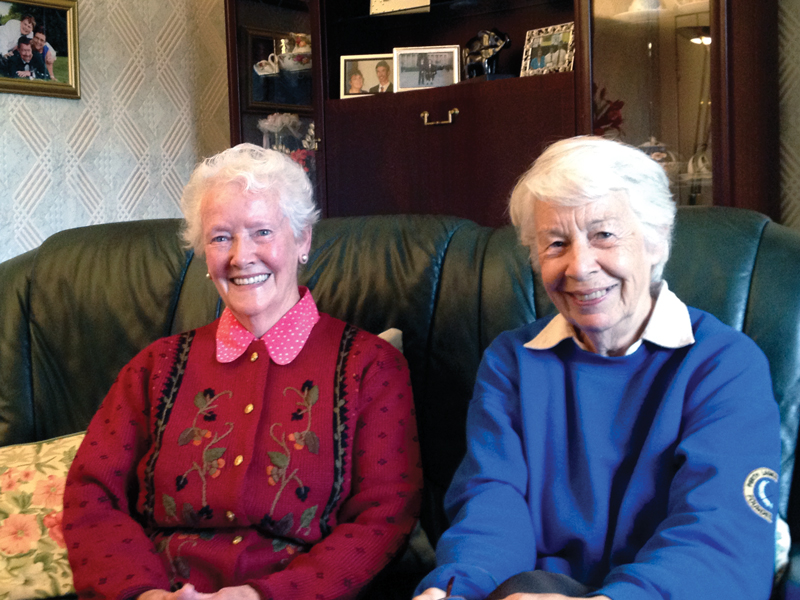 Michael Farquhar: I served my five year apprenticeship at the works, starting in 1956 when I left school at seventeen. I remember I worked for Jean’s dad first day. He was my journeyman and I can remember the first job: Tightening joints 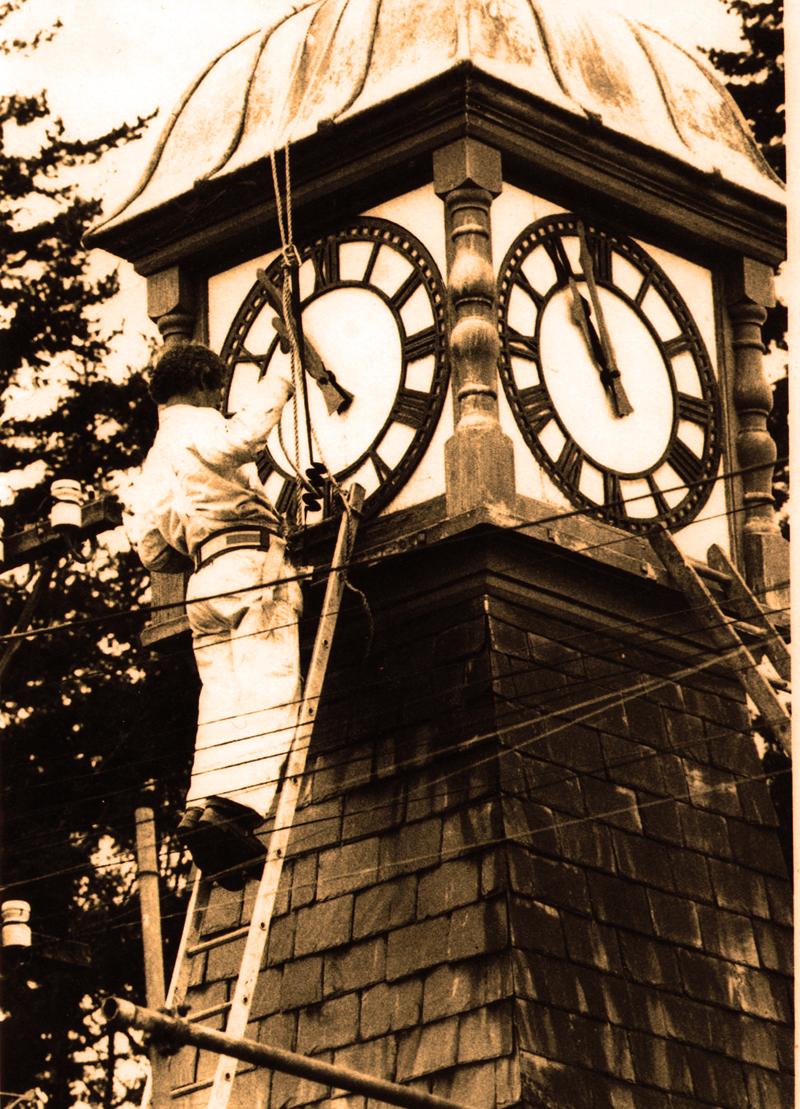 on a steam pipe that we were putting up. Never done it in my life before! I wore overalls – engineers had to buy their own, but cloth-workers got theirs supplied. There was no protection for hands, eyes or head, and we worked from half past seven until five o clock, with an hour off at dinner, a break in the morning and a break in the afternoon. The day didn’t seem that long, because I really liked the work.

Photo: The bleachworks clock could be seen from afar. James Patton (Betty’s brother) is cleaning it and painting the frame.

Though the bleachfi elds at Luncarty were the biggest in Britain, to the passerby, the bleachworks consisted of a number of buildings, impressive brick chimney stacks, and a network of lades with a wealth of plants that changed with each season. 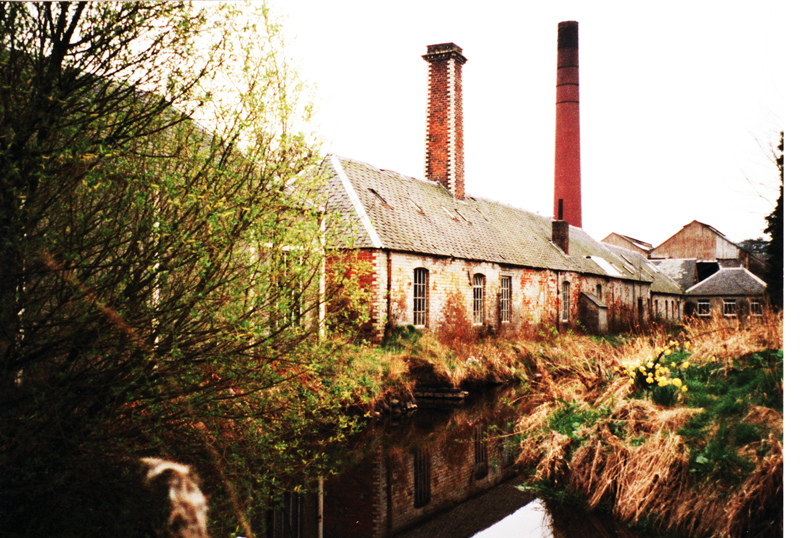 Inside, however, there was the most up-to-date machinery requiring a range of skills and a huge workforce. 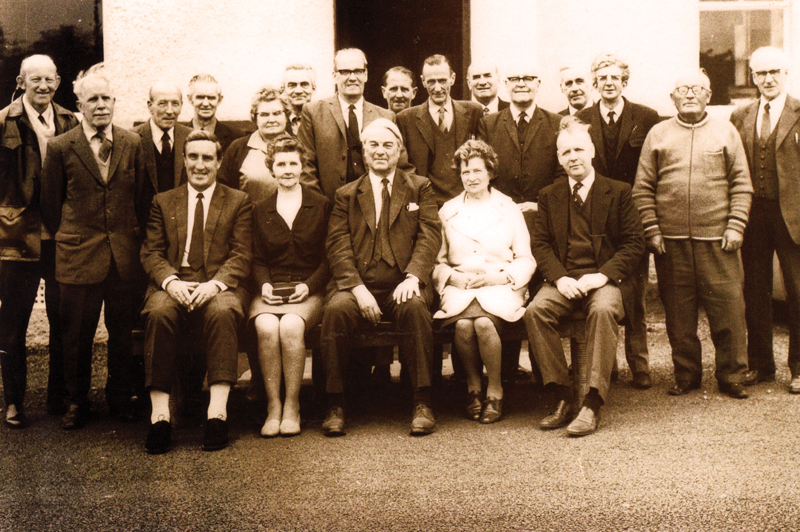 Jean Dickson: This staff photo is from the Fifties. My father is in the back row, (3rd right). He was born in 1904. 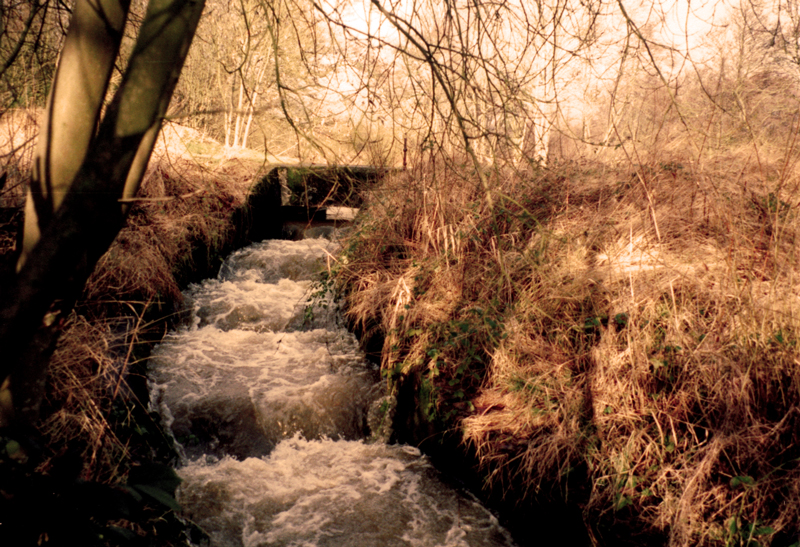 a massive supply of water – without water you can forget it! Besides being needed for the cloth, water was essential to drive the mill-wheel to power machinery.The River Tay is the main source, and a lade was built from Stanley down to Luncarty, and we also took water off the River Shochie and also the Ordie.  It was important to keep the lades clear so the water could run freely. Every year, usually on the August Bank holiday Monday, a team of workers would clean out the lades to the Luncarty Bleachworks.Though nobody was obliged to work on a holiday, they volunteered so they could earn a little extra money. 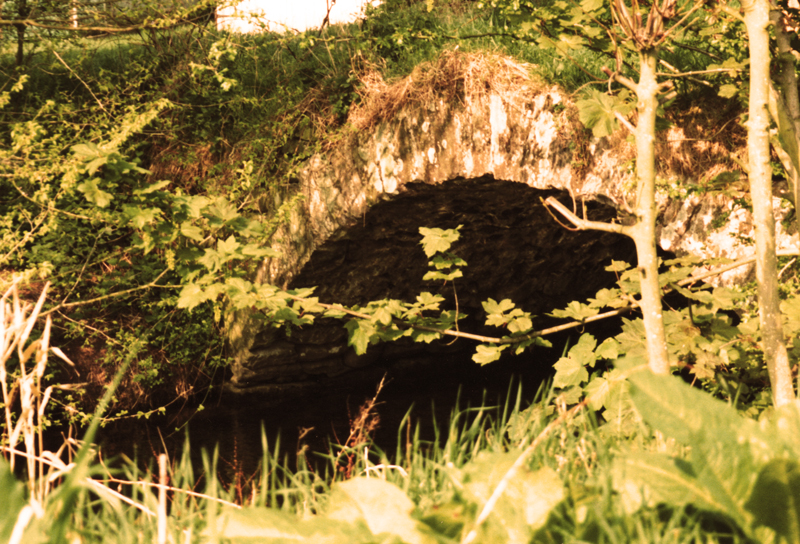 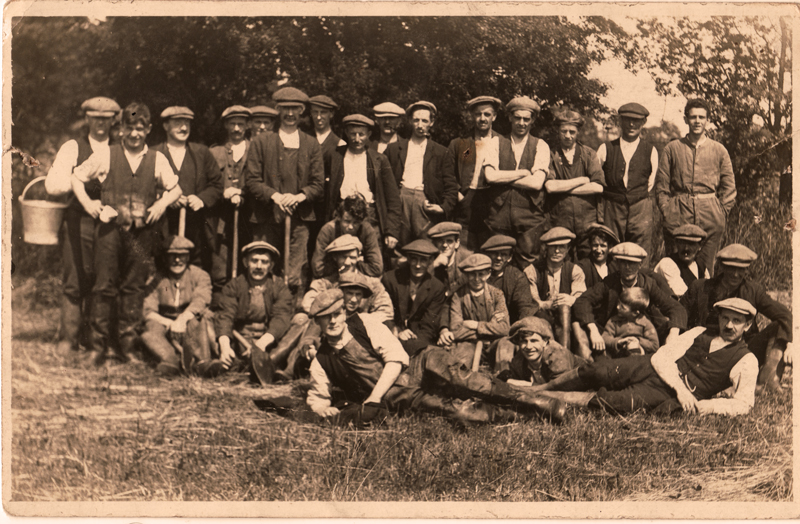 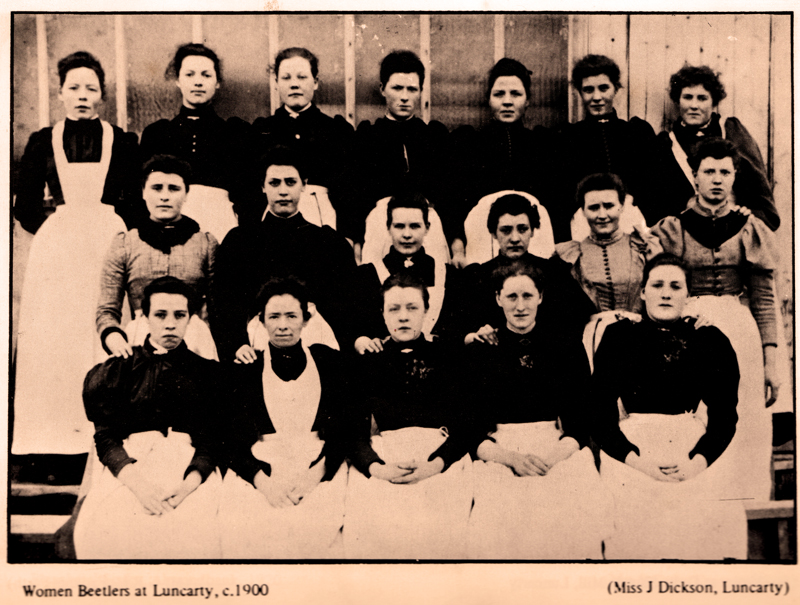 When flax is spun and woven, the naturally brownish linen is starched to enable even tension. The fi nish has tiny surface hairs which have to be removed, and when linen arrived for bleaching, this was a priority. Afterwards, the bales of cloth were ready to undergo the complete process:

Michael: After it had been bleached it was dried. Latterly there were big drying sheds, and then it went through the scutcher – that beats it and softens it.

Jean: There used to be a beetling machines that had pieces of wood that came down hammered the cloth, to soften it and finish it. This photo is from 1920, but they still had them working in the Seventies.

John: It went down to the blueing shed – cotton isn’t pure white, it’s slightly yellowish, so it went through a blueing agent. And fi nally the bleached sheeting went through a starch to fi nish it, ready for hemming.

When the Bleachers’ Association took over Luncarty Bleachworks the manager was keen to foster the social aspects of the village. The Bleachworks sponsored facilities to promote healthy living, and maintained a cricket pitch, a football field, a sports pavilion, a bowling green, tennis courts, a hall, and a cinema. Gardening was also encouraged and there was an annual competition for best garden. 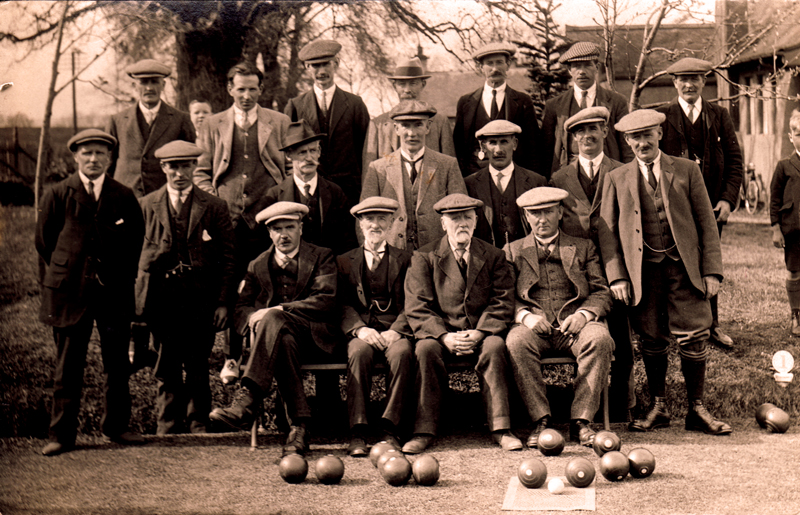 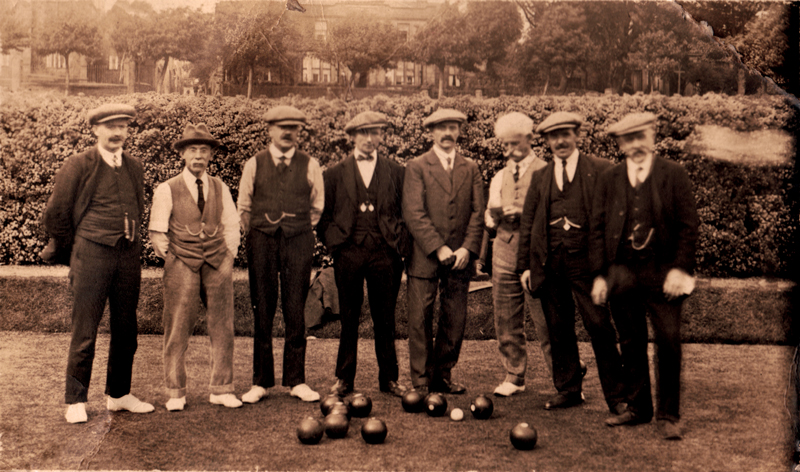 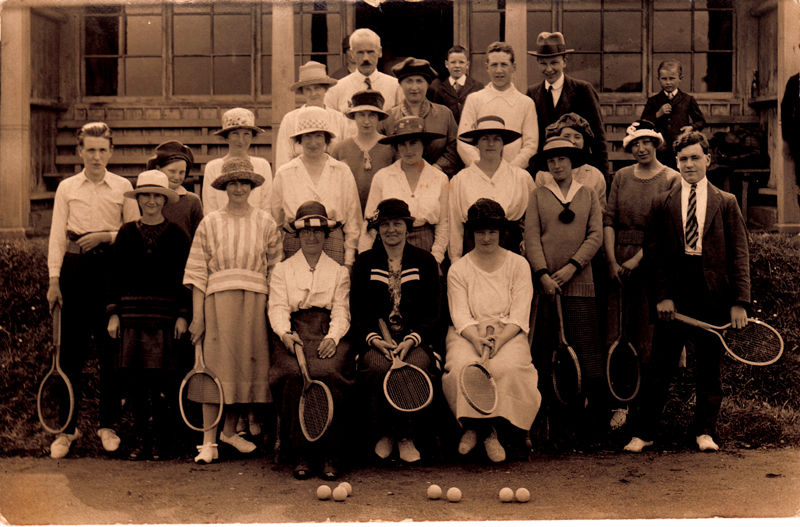 Jean Dickson: This is the opening of the bowling season, 1930’s, round about April or May, depending on the grass. My father is the one without the hat (right), and some of us still play bowls. Tennis was also very popular.

Music and drama were very popular and there were concerts in the village.

This is Luncarty Village Orchestra outside Marshall Cottage in 1900. Several members of the Patton family played instruments and David Patton (Jean Dickson’s grandfather) also had a dance band: “There were five of them in it. He played the flute and piccolo, Uncle Cormack played drums and there was a pianist and two violinists. They were known as ‘Patton’s Impromtu Orchestra’.

Jean: This is the United Free Choir, all dressed up for their performance, probably Gilbert and Sullivan. My grandfather and both my parents were in this (c. 1920). Grandfather is 2nd from end of 2nd back row; my father was blacked-up and he’s 3rd from left near the back. My mother is in the middle row, wearing a Little Red Riding-hood cloak.

John MacKay: When I started work at the bleachworks the manager was quite a paternalistic fellow. He looked after his workers and a lot of them stayed in works’ houses – they built 110 houses. And we used to have a day out for all the workers and their families.

Michael Farquhar: We went to Rothesay one time , doon the watter, and we saw the ocean liner, the Queen Mary. On other outings we went to the theatre in Glasgow. We all had a great time! 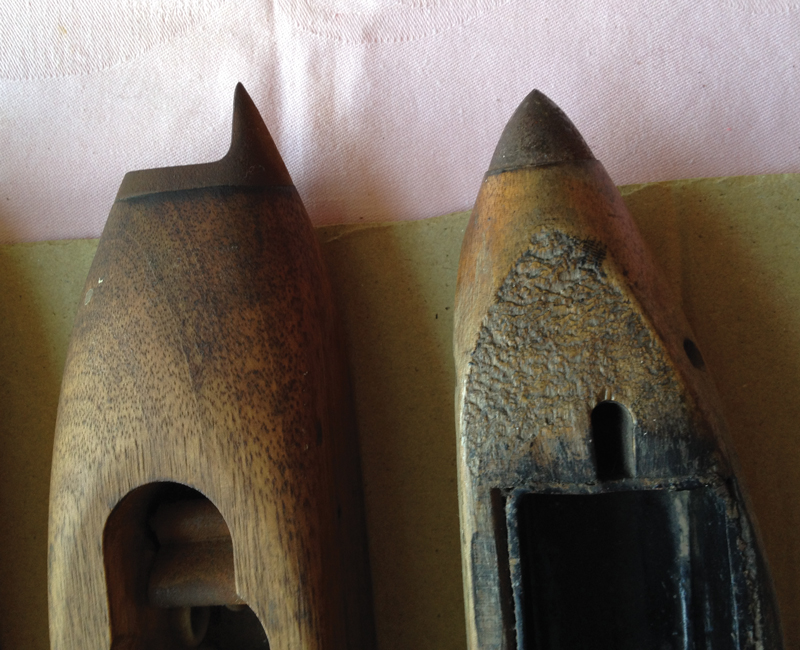 With the introduction of the ‘flying shuttle’, the weaving industry was revolutionised, and by 1800 power-loom factory workers had taken over from hand-loom weavers in Scotland. Smooth-running shuttles were essential to the industry, and in 1844 John Menzies of Logiealmond built a shuttlemill by the bank of the River Ordie, on the site of an old mill in Luncarty.

For over a hundred years a small group of workers made shuttles that supplied a world market, particularly after the mid-1850s, when Mr. Menzies introduced his invention of a side-tipped shuttle. It was a lot safer than earlier designs, which could fly out an injure the weaver. Facial injuries were most common, all all too many women were disfigured by such accidents.

The centre-tipped shuttle was gradually replaced by the side-tipped model and the Luncarty Shuttlemill began to supply mills at home and abroad.

In recognition of his huge contribution to safer working conditions in the Dundee jute-mills, in 1878 Mr Menzies was honoured by a special ceremony and presented with a silver and gold model shuttle that can now be seen at the National Museum of Scotland:

‘Presented with a purse of sovereigns to Mr John Menzies, Shuttle Maker, Ordie Mill, Perthshire, by a number of manufacturers and factory managers, to commemorate the various improvements he has made on shuttles, particularly the introduction of the side-tipped shuttle, which has made power loom weaving a safe calling to those employed therein. Dundee, November 1878.’ 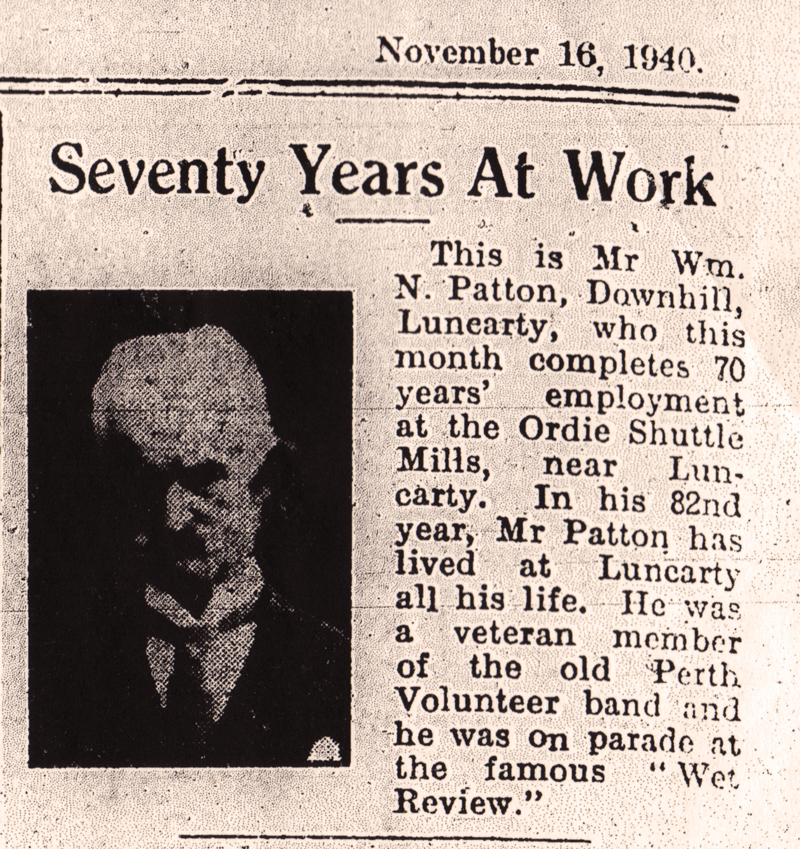 One of the shuttle-makers trained by Mr Menzies was William N. Patton who was taken on as a twelve-year-old apprentice in 1871. The shuttlemill operated with six workers: two journeymen shuttle-makers, one apprentice, and three labourers. On the far right in the photo below, he is holding one of the shuttles he made. Mr. Patton continued to work in the mill until the age of 82, and his grand-daughter, Betty, is justly proud of his seventy years of service. 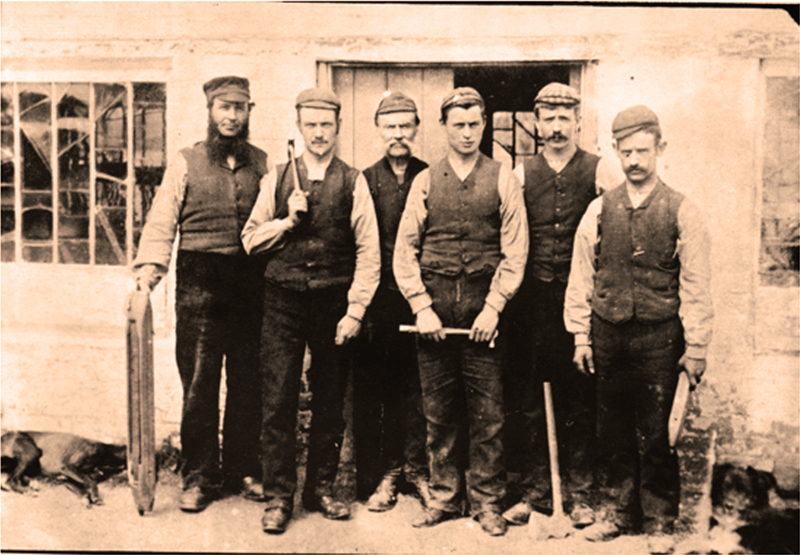 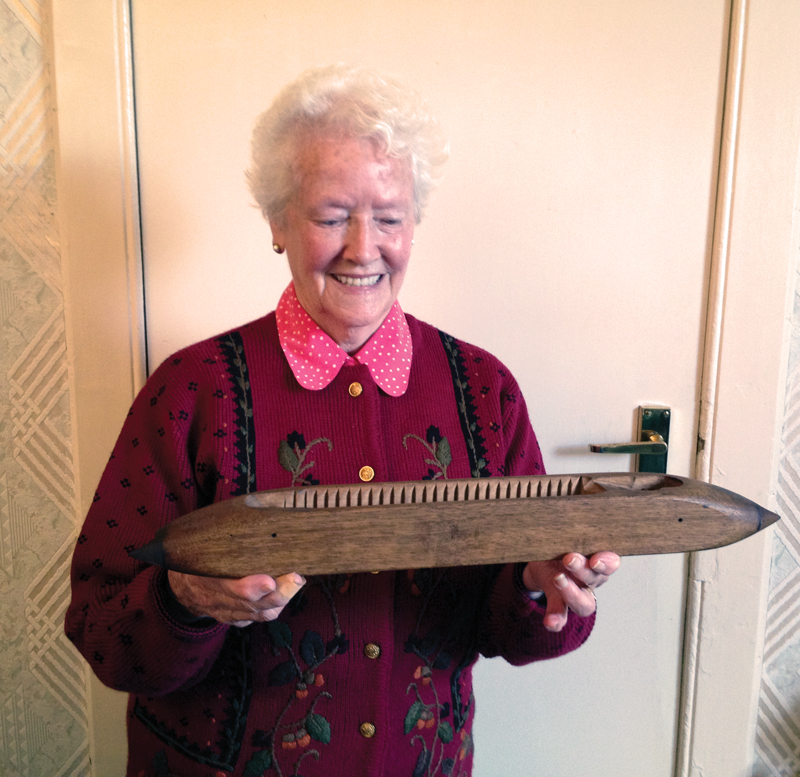 Betty Robertson (née Patton) has lived in Luncarty all her life and remembers when the village was a hive of activity:

“They had a big water wheel that drove machinery, and they used hard wood – beech and persimmon. But a lot of the work was done by hand, to get the right finish.”

In 1889, the Ordie Mill was taken over by Peter McFarlane, an experienced mill-right, whose sons later joined the business. 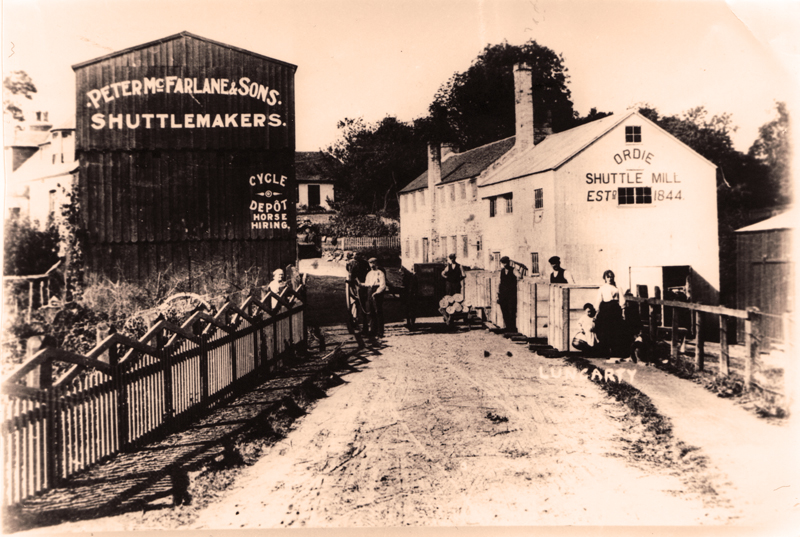 Being an enterprising family they also hired out cycles and horses, as Luncarty was a busy place, alive with workers that sustained Scotland’s linen and cotton industries.

The Patton family was to have two more generations learn the craft, as Betty’s father, also William, became a shuttle-maker. Before taking up his apprenticeship, he worked as a wood-cutter, as his brother had a wood-cutting business – William Patton is the young man holding the axe. In the 1920s he was apprenticed to his father, and became equally skilled.

From 1939 to ’45, his career was interrupted as he served in the Second World War. Though Betty was just a little girl at the start of WW2, she remembers how family life changed when her Dad went off to war. The shuttlemill still operated, however, giving a sense of normality to the village.

Thousands of shuttles continued to be sent to Dundee and to the nearby Stanley Mill, where wartime workers were re-trained to make jute webbing needed for military activities: uniforms, spats, belts, as well as machinery parts. 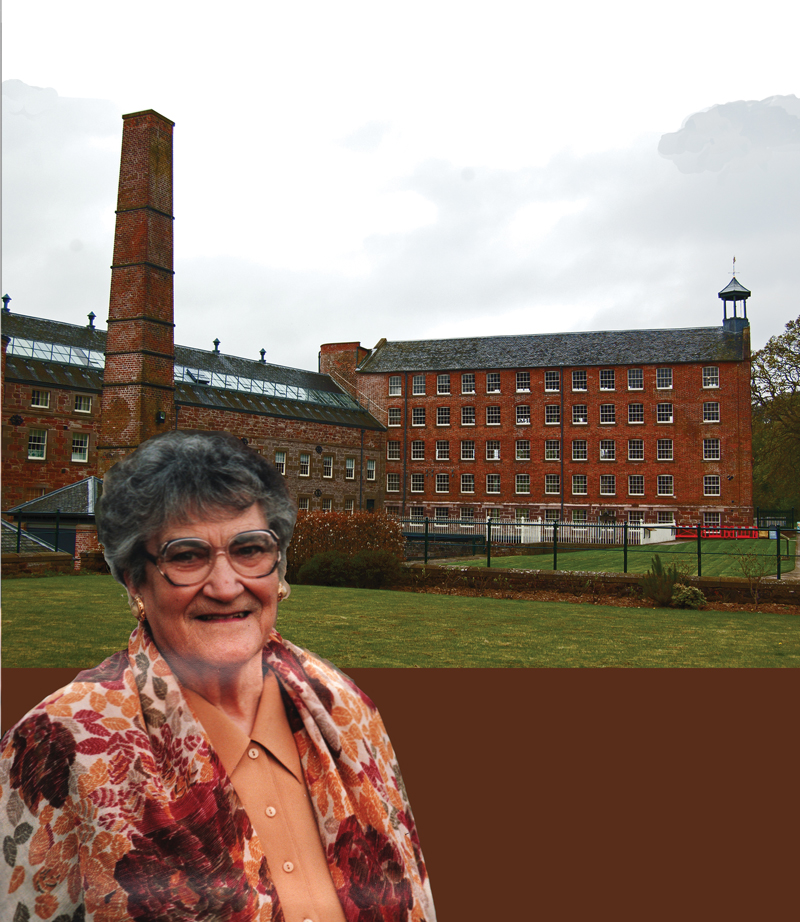 “We were just told we’d be making webbing for the soldiers, but we had no idea what it was for.” 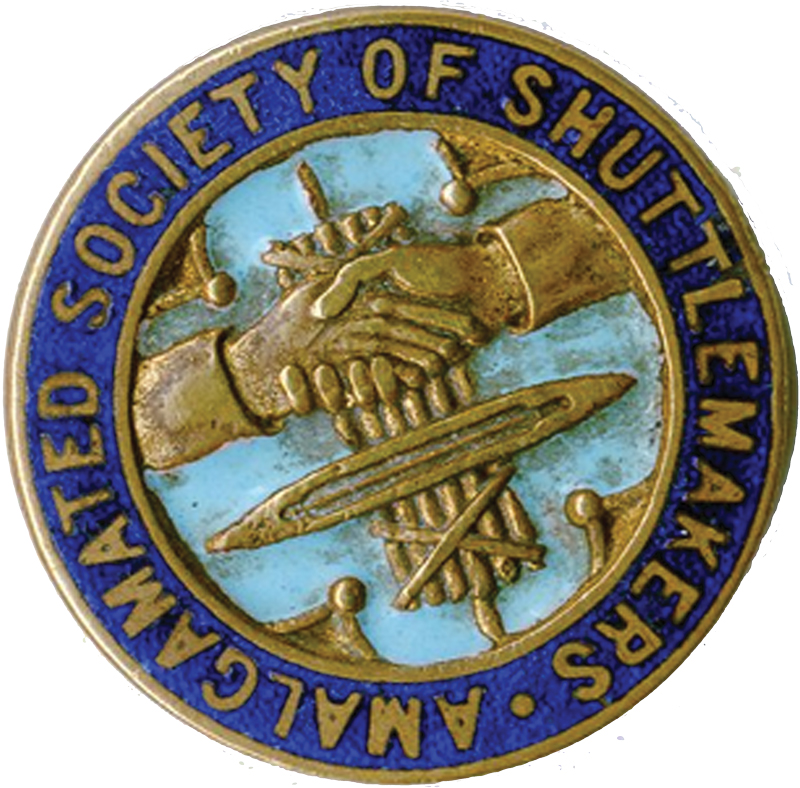 By 1953, it was all over; the pride of Luncarty shut down. Shortly afterwards the buildings were demolished, leaving no trace of a highly skilled trade that had served the world’s weaving industry. 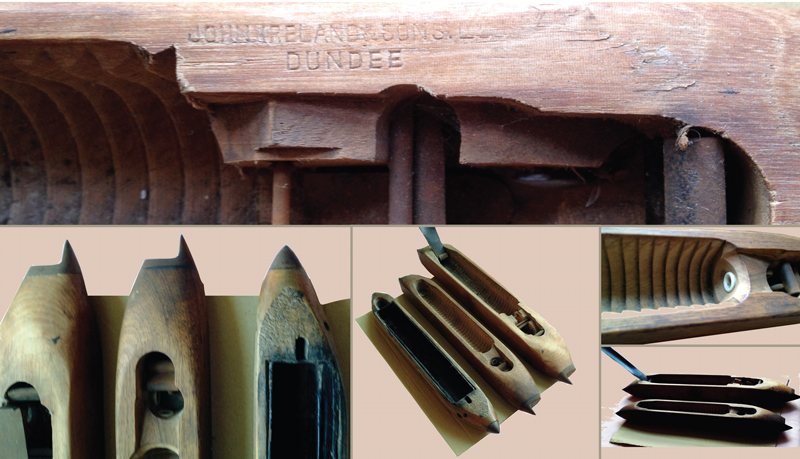