Lecture: The Legacy of Eric Cregeen; A Treasury of Manx and Scottish Traditions by Margaret Bennett. 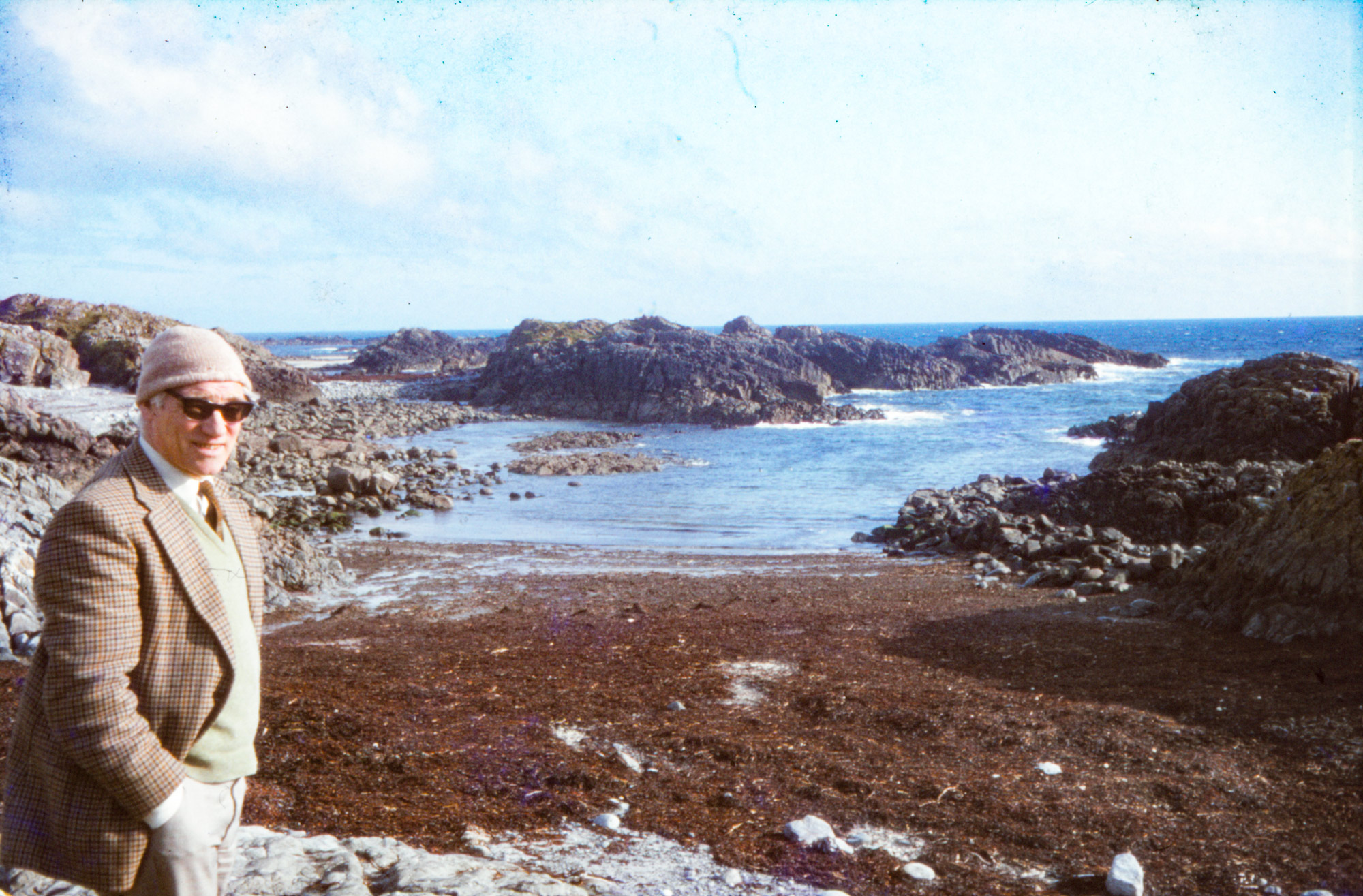 This is  part of a project inspired by the work of one of the most influential oral historians of the 20th century, Eric Radcliffe Cregeen (1921–83). He recorded people from many walks of life and made major contributions to the Manx Language and Folklife Surveys; the Royal Commission on the Ancient and Historical Monuments of Scotland, and to the Archives of the School of Scottish Studies (Special Collections at the University of Edinburgh). Meticulous in his methodology, Cregeen kept detailed fieldwork journals, which he anticipated using for further research and in preparation of publications. Sadly that was not to be, as he died in 1983 at the age of 61. 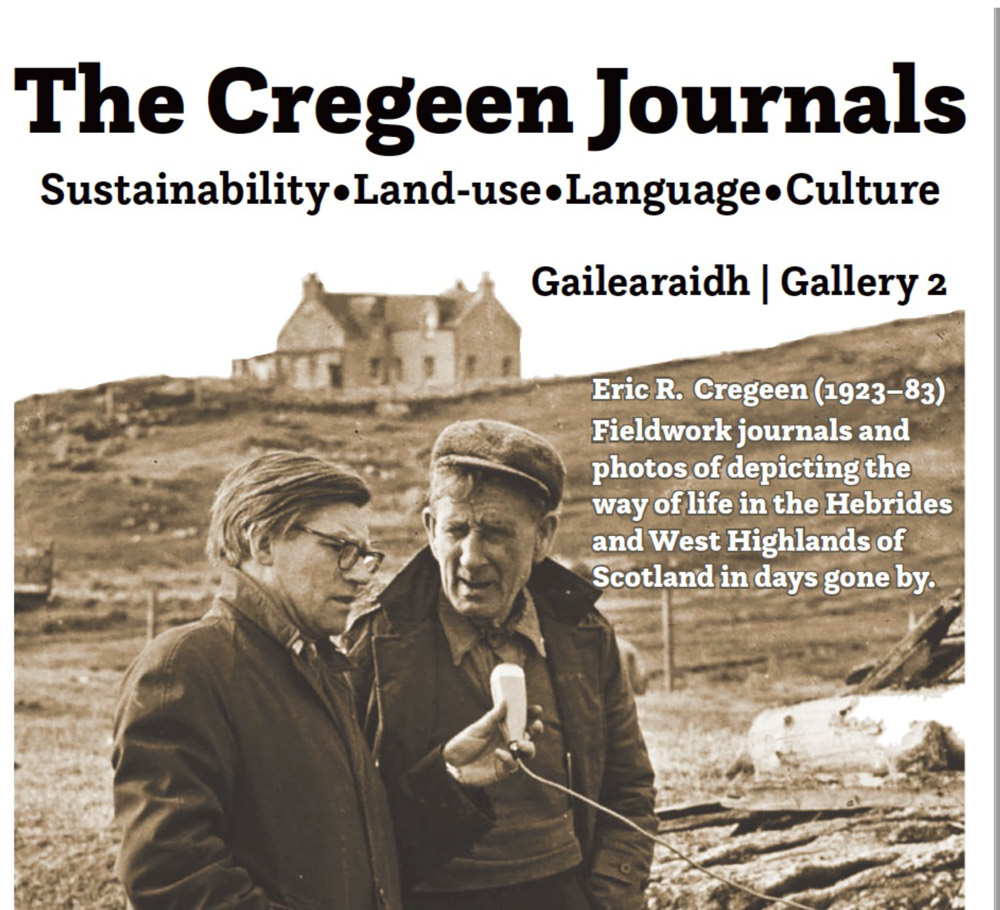 While most of the tape-recordings were made in Scotland, Cregeen’s roots were in the Isle of Man. He did not grow up there but was born in Dewsbury, Yorkshire, where his father was a Methodist clergyman. However, both parents were Manx; his mother’s people, the Radcliffes, were from Peel, where his grandfather had a smiddy, and his father’s family were from the south of the island.

Throughout childhood and adolescence, Eric and his siblings spent school holidays on the island, “at home” among their own people. During these formative years Eric developed a passion for the Manx language, social history and culture, and he began to write down information gleaned from local folk, particularly the older generation, and to make lists of Manx vocabulary. In 1935, he won a scholarship to the Leys School, Cambridge, and in 1939 went on to university. He studied History and Latin at Christ’s College and became an avid reader of Anthropology. With academic rigour he could combine all these disciplines while drawing from his own experience to practise and perfect the skills of an oral historian. His studies were interrupted by the war, however, and Eric (a conscientious objector) worked on farms. After the war he resumed university and during the holidays headed for the Isle of Man. As his journal of 1948 shows, ties to the island seemed stronger than ever:

April 1: I walked along the quay and the shore road - black, cold night, pierced by a few stars, a brilliant planet, the light of the lighthouse and a few blueish lamps along the quay. The sea was thudding heavily on the shore – I cdnt. see it in the blackness. There wasn’t a person on the streets, but I felt as I walked that I was at home. Here my forebears farmed and fished, wrought iron and built houses, lived and died obscure but known in a small community. Here a man meant something. Here people live close to elemental things - winds, earth, the sea - and they become themselves elemental and simple and eternal by sharing in this life.

During the university holidays Eric volunteered to assist with the Manx Language Survey that had been set up by Museum Director, William Cubbin. Inspired by the work of the Irish Folklore Commission, Cubbin made sure that all volunteers received training, based on Seán Ó Súilleabháin’s classic guide for fieldworkers, A Handbook of Irish Folklore (Dublin, 1942):
Information should be written down fully (and, where possible, in the actual words used) as soon as possible after obtaining it, if not at the time...Plans or rough sketches are valuable aids to verbal descriptions of implements or buildings, etc.
In 1948, the Irish Folklore Commission sent a special van to the island, driven by folklore collector Kevin Danaher, who had developed a built-in recording studio. Eric was among the volunteer collectors who helped record the voices of Manx speakers, which Danaher cut on 12- inch discs and deposited in the Archives of the Irish Folklore Commission. Copies were also placed in the Archives of Manx Museum, adding to the wax cylinder recordings made in the 1920s by Norwegian linguist Carl Marstrander.
When his last exam at Cambridge was over, Eric returned to the island and to the work he loved: August 13, 1948 “At Manx Museum; classified 24 Manx notebooks…” In September he applied for the post as Secretary and Assistant Director of the Manx Museum and on October 1, 1948 he wrote: “Began work in the Manx Museum …. Basil Megaw is a kindly chief ….” In his new role, he implemented the Museum’s plan for a Manx Folklife Survey to help “build up a picture of Manx traditional life as it survived fifty years ago, and earlier….” Collectors made every effort “to gather a mass of unrecorded information about buildings, crafts, tools and utensils, agriculture and fishing, dress and ornament, customs and beliefs, together with details of the people then alive and incidents in their life.”
Cregeen remained in the post until 1950, after which he became a schoolmaster. In 1954, when an opportunity arose to re-engage with his love of oral history and folklife, he took up a post as Resident Tutor in Argyll for Glasgow University’s Extra-Mural Department. As well as breaking new ground in adult education, he soon began to explore the Gaelic traditions of Argyllshire, finding strong similarities to his experiences on the Isle of Man. Again he felt at home among people who lived off the land and sea, and whose knowledge, skills and wisdom sustained their lifestyle and their culture. The evening classes in rural communities drew together folk from all walks of life, gave rise to lively discussions, and, for Cregeen, opportunities to continue fieldwork. His journals, tape-recordings and photographs during these years record a way of life that will never be seen again.
From 1964 to ’65 Cregeen had a year’s sabbatical when he received a Nuffield award to study Social History and Social Anthropology at Cambridge. He had already made an impressive contribution to the Archives of the School of Scottish Studies when, in 1966, he was appointed by the University of Edinburgh as Lecturer in Scottish Studies. With energy, enthusiasm and dedication he continued his research and fieldwork recording, regularly following up with lectures and publications.
The 1970s saw an increasing interest in oral history in Britain, and in 1973, under the leadership of Paul Thompson (University of Essex), a group of eminent scholars founded the Oral History Society. The following year Cregeen joined a prestigious group of conference speakers that now reads as a Who’s Who of Oral History: Charles Parker (pioneer of the BBC’s oral history programmes), Seán Ó Súilleabháin (Irish Folklore Commission), Christopher Smout (Scottish historian), George Ewart Evans (Suffolk folklorist), Robin Page Arnot (founder of Labour Research Department, University of Wales) as well as Alan Bruford and John MacQueen (School of Scottish Studies). The collective aim, summed up by Cregeen, was that the oral historian should primarily be concerned with “those sections of society which are unlikely to leave behind them any quantity of memoirs, diaries, or correspondence from which history can subsequently be written.”
In 1978, Cregeen co-founded The Scottish History Group, delivering an opening address that now seems prophetic: “the recordings we make now will be a powerful aid to future generations living in a much-changed society.” He could not have foreseen just how changed society would be, or that we would have technology that allows world-wide access to recordings – over 2,000 tracks of Cregeen’s recordings (approximately 10%), are online via Tobar an Dualchais/Kist o Riches.
The hand-written fieldwork journals that inform the recordings have not been accessible until now, as they have remained with Lily Cregeen, who accompanied her husband on several fieldtrips to Argyll and the Outer Hebrides.
Scotland, and folklorists globally, owe a huge debt of gratitude to Eric Cregeen for the treasure trove of recordings, photographs and journals he left, documenting the lives and traditions of crofters, fishermen, housewives, shepherds, cattle-dealers, drovers, blacksmiths, horse-dealers, carpenters, tradespeople, weavers, craftspeople, children, healers, whisky-makers, teachers and clergy. It is only fitting that we should remember him and look after his legacy in a way that he himself would have done had he had the opportunity. Eric Cregeen had great hopes of publishing much of the material he recorded and collected, and it is our hope that this project is a worthwhile contribution to achieving that purpose.

Mrs Lily Cregeen, custodian of her husband’s journals, initiated this project with Grace Notes Scotland, a Scottish charity “dedicated to handing on tradition”. Under the title ‘The Cregeen Journals: Sustainability, Land-use, Language and Culture’, the project has been led by folklorist Dr Margaret Bennett, former lecturer at the University of Edinburgh’s School of Scottish Studies.

As the journals collectively amount to almost 4,000 pages, it was essential to engage a team to digitize and transcribe them in order to conserve the collection for future generations and for further research. A bid to Heritage Lottery Fund secured 90% of the funding for the project, which was carried out over 20 months and, upon completion, achieved the following aims: • Page by page digital images of the unpublished fieldwork journals.

To date, 2019, the 9 volumes of the Cregeen Journals may be consulted via several libraries and other centres, including: